For a while, liking this song was stigmatic. That was the disco backlash of the 80s and the rise of synth pop and rock and roll and peer pressure “EW YOU LIKE ABBA?!”. Of course, today, ABBA is (rightfully) regarded as being a pillar of pop music. I no longer get strange looks when Waterloo (which features prominently on my regular playlists) echos across the bus from my earbuds.

This was probably the first song I actively listened to on cassette (yes, I'm that old), first on a red Panasonic player, which I think was my sister's, though I had a habit of stealing it frequently until I got my own ghetto blaster. 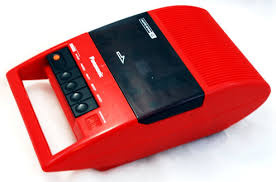 Some 80s design was actually pretty timeless. I don't know what it was about Super Trouper (which I kept wanting to spell “Souper”, because why “Trouper”? — because it's the name of spotlights used in concerts, a thing I just learned about!), but the song stuck with me. I played the entire Super Trouper album front-to-back over and over and over until my mother took the tape away (can't say I blame her), and Super Trouper (the song) remained the one with me.

I remember sitting at my desk, which my father built as part of my wardrobe (having lost my closet to a bathroom renovation), listening to this while … presumably reading, as I don't think I had homework at the time. There was something about the harmony between Anni-Frid and Agnetha during the chorus, with Björn and Benny providing their baritone “troup-pah-pah”, creating a choral effect that I totally didn't understand at the time and wouldn't for many years to come.

If I can credit any one song for setting the foundation of my love of music, this is likely it. It's because of Super Trouper that many of the other songs in the Soundtrack of My Life are there, and I might even go so far as to suggest why I have an appreciation for (good) pop music.